Previously in part 1, we saw how to troubleshoot one of the most common issues that people have with KSQL—queries that don’t return data even though data is expected. Here, we’ll dig deeper into the internals for more advanced troubleshooting and better understand how it all works.

You can use this article for reference, or follow along with the code examples to try them out as we go. Using Docker and Docker Compose, we can easily provision an environment in which to explore and try out the different techniques and tools. The environment includes a data generator for a continuous stream of events into an Apache Kafka® topic that we will use for testing. All the necessary code is available on GitHub.

How many messages have been processed by a KSQL query?

In KSQL you can populate Kafka topics with the results of a query using the CREATE STREAM…AS SELECT syntax:

Because KSQL queries are continuous, this means that we’ve just written and executed an application. It takes the inbound data, filters it for a condition and writes any matches to the target topic.

What does any self-respecting application need? Metrics! We need to know how many messages have been processed, when the last message was processed and so on.

The simplest option for gathering these metrics comes from within KSQL itself, using the same DESCRIBE EXTENDED command that we saw before:

Also note that an increasing failed-messages count is not a good sign for the health of your query. It could be caused by serialization errors, as discussed in part 1. The metrics shown here are local to the server on which the DESCRIBE statement executes. The documentation includes definitions of all the metrics.

What’s happening under the covers?

To dig deeper into the execution of queries, let’s start by listing the queries that are running:

We can examine the query itself and how KSQL is going to perform the transformation we’ve asked it to through the explain plan—the same thing as you get in a RDBMS. You can access it by using the EXPLAIN command:

Because KSQL is built on Kafka Streams and executes queries using it, the EXPLAIN command can also tell you the topology that Kafka Streams will use:

Taking the query name, you can even go and poke around the KSQL server log, and see the Kafka Streams applications firing up with the query name as part of their client ID:

The KSQL server log is where you’d head to if you’re suspecting problems with your queries that you can’t diagnose through the KSQL CLI itself. To locate the server log, see here. 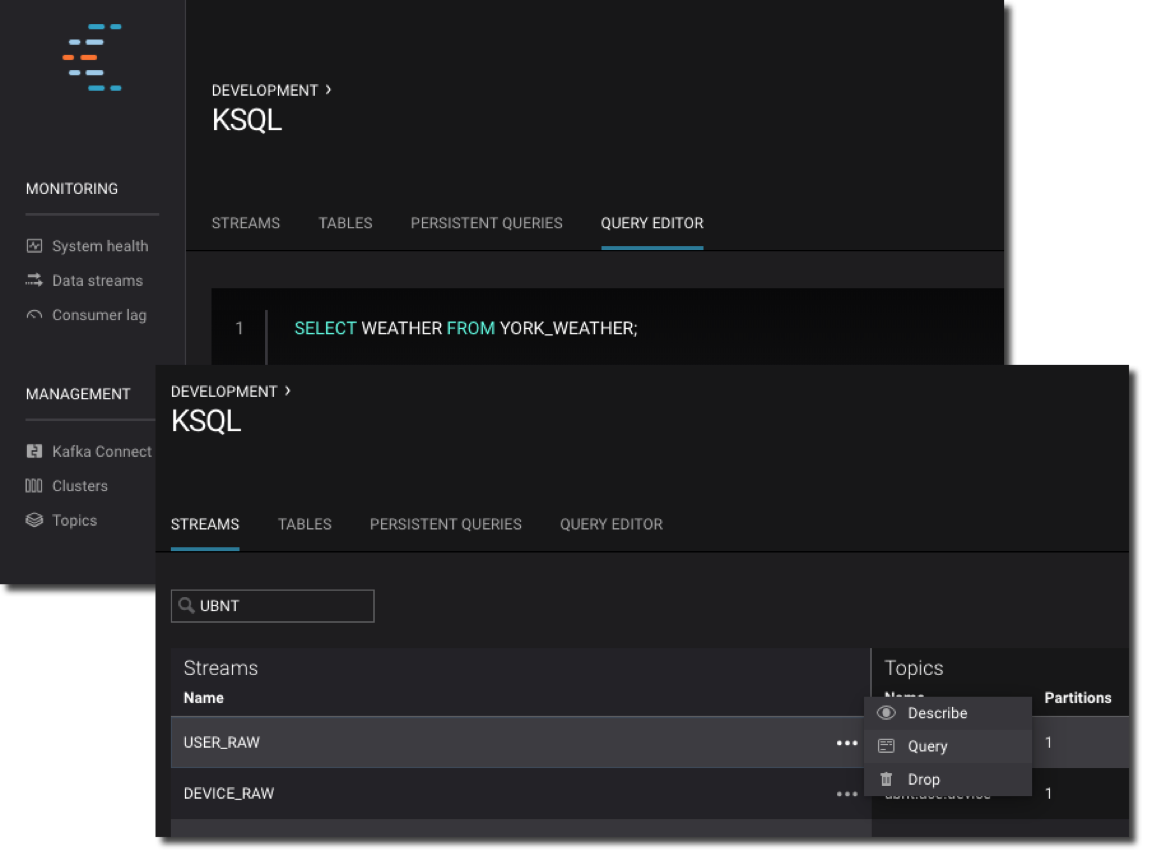 It also has a powerful streams monitoring capability.

With streams monitoring, you can answer these important questions: 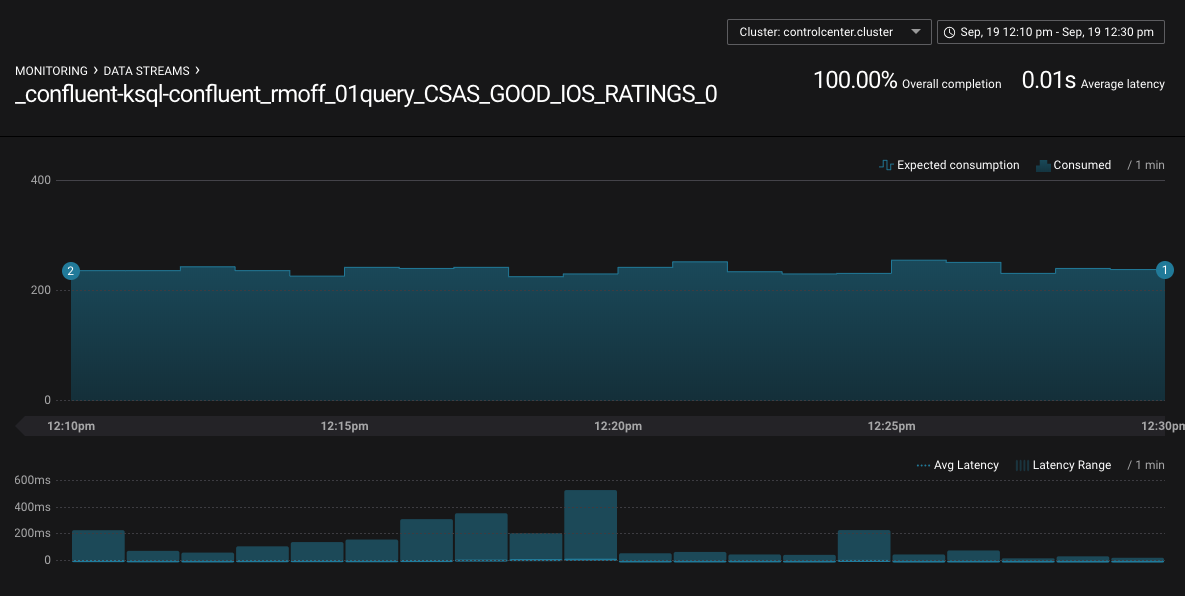 You can drill down into individual topics and consumers to inspect their particular behavior. Here, we can see that there are two Kafka Streams threads, only one of which (StreamThread-2) is consuming data. The reason for that is the source topic has a single partition: 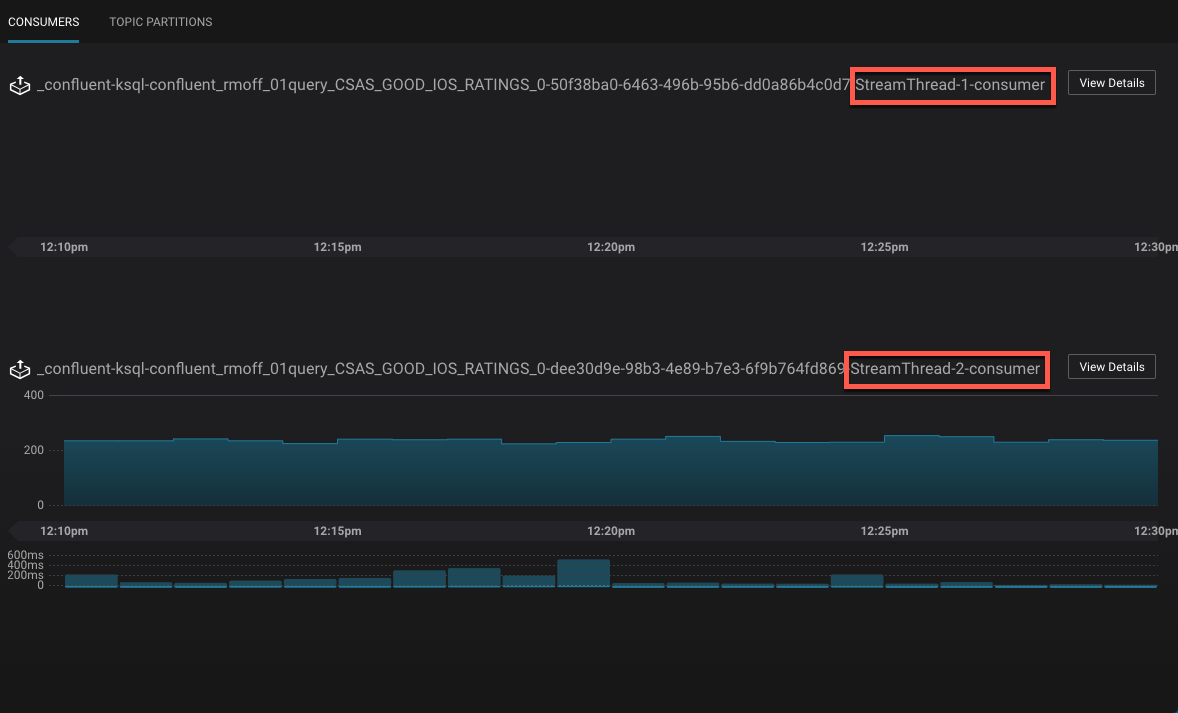 If we re-partition the topic to four partitions, the Kafka Streams/KSQL task then consumes this over four threads: 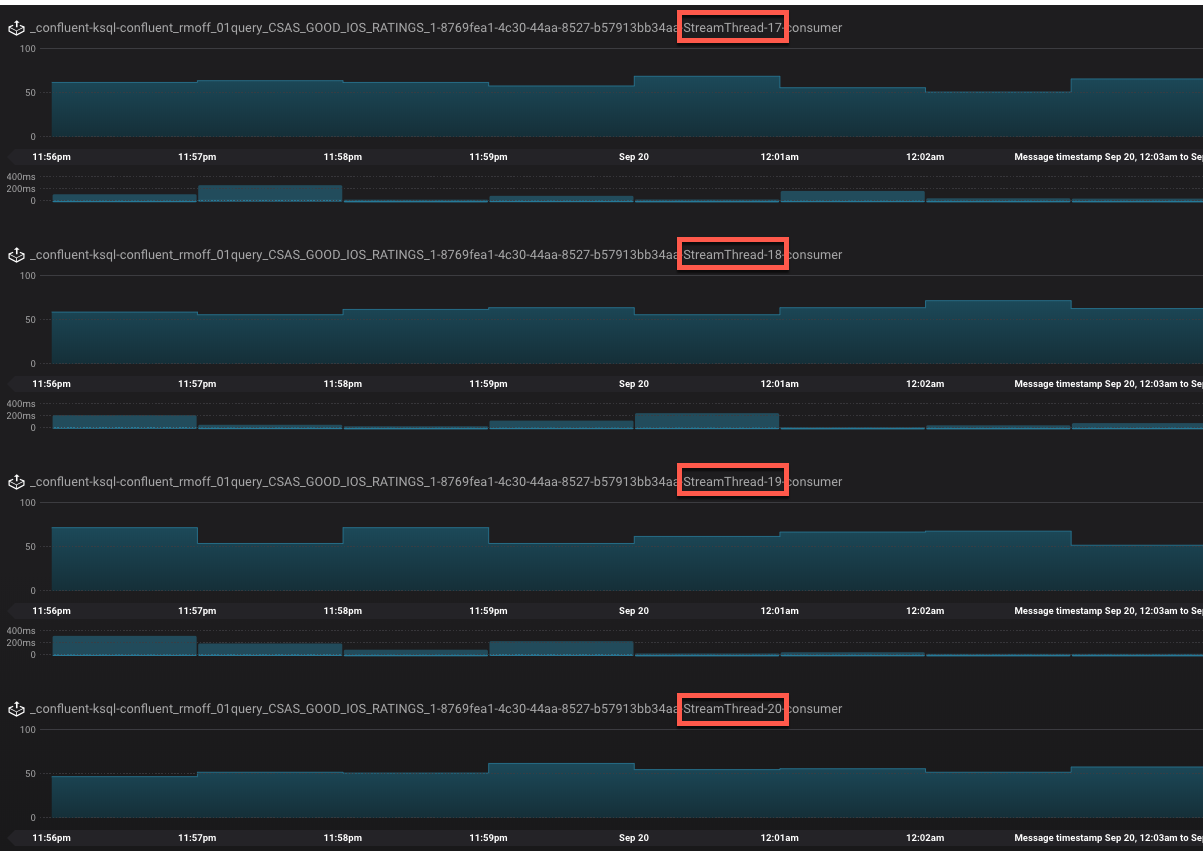 Confluent Control Center can also show you when consumers are over-consuming, which can occur when messages are being processed more than once—or as the case is in this screenshot, the required monitoring interceptors haven’t been set up on the producer.

Confluent Control Center is very cool for inspecting the flow of data in topics and behavior of producers and consumers, but what if we peeked inside how those producers and consumers are actually behaving? KSQL, as with other components in the Apache Kafka ecosystem, exposes a wealth of metrics through JMX. You can access these on an ad hoc basis through something like jmxterm or JConsole, as seen here:

Even more useful is persisting them to a data store, such as InfluxDB, for subsequent analysis. This analysis can be done through Grafana, for example: 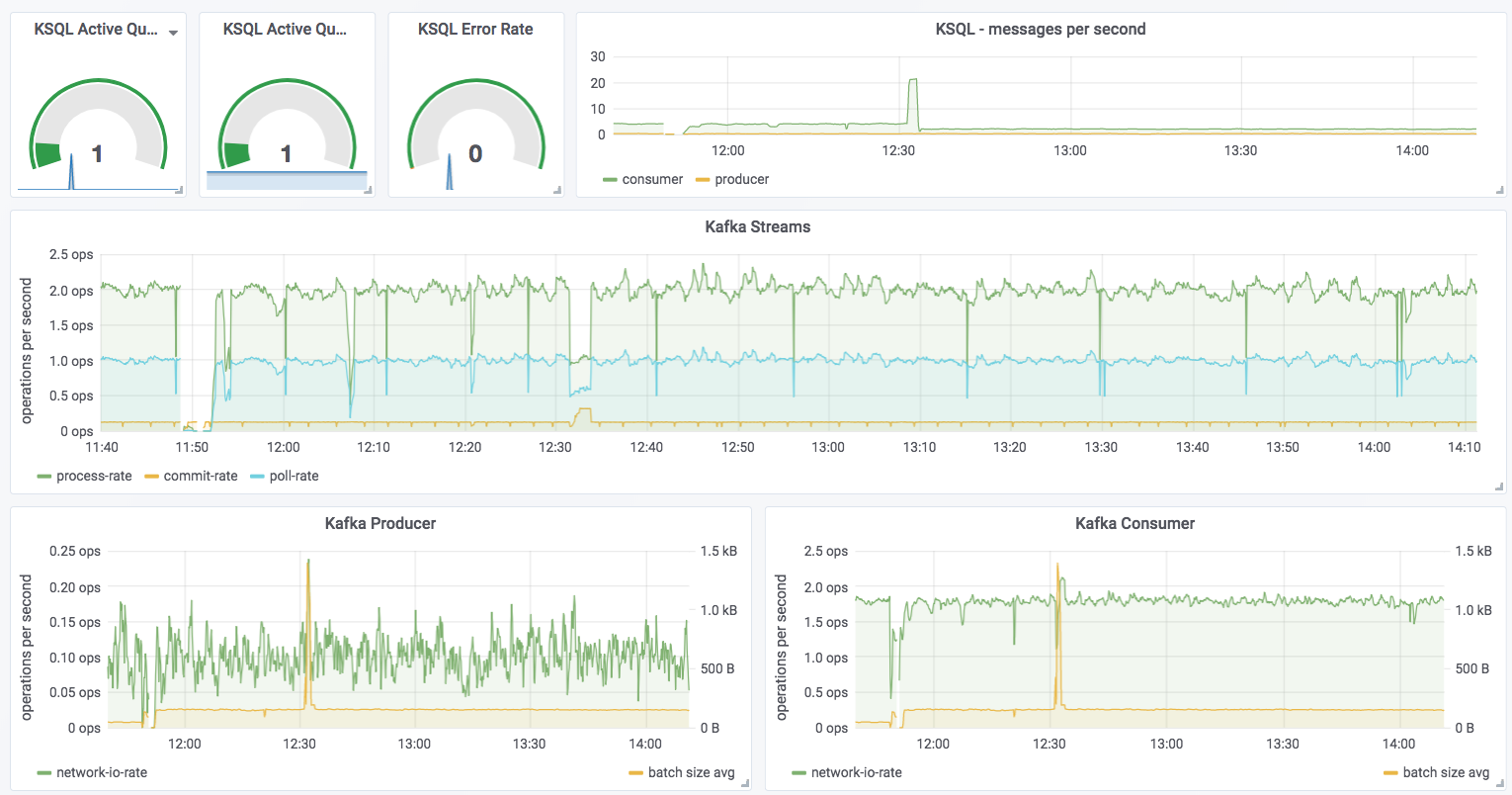 The spike at 12:31 coincides with the example I ran in part 1 of trying to read messages with the wrong serialization format defined. Conveniently enough, there’s also a JMX metric we can track for errors:

The spike in error-rate as well as the increase in num-active-queries likewise make sense, because the additional query was running against the invalid stream at the time on top of the fact that there was one already running against ratings.

You can dig down into the underlying Kafka Streams metrics:

Kafka Streams itself is built on Kafka, and you can drill down to the underlying Kafka producer and consumer metrics too:

If you want to try this out for yourself and explore the JMX metrics, the complete code samples are available on GitHub.

For details of the specific metrics, see:

The Curious Incident of the State Store in Recovery in ksqlDB

When operating cloud infrastructure, “time is money” is more than a cliché—it is interpreted literally as every processing second stacks up on the monthly bill. ksqlDB strives to reduce these

We’re pleased to announce ksqlDB 0.11.0, which takes a big step forward toward improved production stability. This is becoming increasingly important as companies like Bolt and PushOwl use ksqlDB for

ksqlDB 0.10 includes significant changes and improvements to how keys are handled. This is part of a series of enhancements that began with support for non-VARCHAR keys and will ultimately